Wales proved so forgiving that I could take my time cycling across to the peak District, taking a full day off on the way. I met my second Birtwistle (Andy this time) of the trip at the Hen Cloud cafe for an afternoon on Staffordshire grit. We chose the trickiest of the routes to start on, Central climb which has a couple of awkward (classic?) cracks to begin with where were regretted not borrowing some slightly bigger cams for protection. Fortunately all the climbing after that was straightforward, if a little polished. I accepted the offer of dinner and a comfy bed for the night, even though it did require and extra 20 mile cycle that evening, definitely worth it for the Birtwistle hospitality!

Andy B on Technical Slab 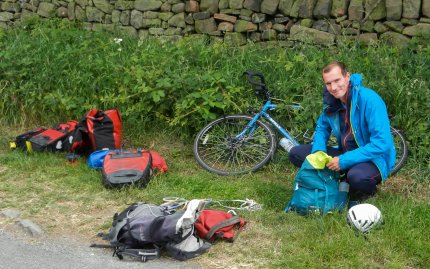 Some poser on Hen Cloud

A leisurely ride from Ashbourne up through the peak was slightly tainted by the discovery of a large slash in my back tire. I tentatively cycled the next 10 miles to Matlock where I could replace it with the beefiest one I could find, so hopefully no more punctures.

Libby joined me for a fine late afternoon/evening on the Eastern edges, first at Birchen and then across to Stanage. Libby spent last summer setting the ladies record for a self propelled round of the Munros, so definitely quite a cruise just ticking six small routes in a day. Been years since I have climbed at Stanage popular end and I had forgotten just how good and plentiful the routes there are. Zoomed downhill all the way into Sheffield in time for pizza and beer on Ecclesall road.

finishing the climbs on Birchen

Libby having fun on Sail Buttress

Stanage basking in the evening sun

A full day off in Sheffield, baking flapjacks and tinkering with my bike before setting off on what would be the start of 11 long days. First a long ride up to Almslciff for Parson’s chimney with Andy T and John, a very daunting looking overhanging green chimney which I found very enjoyable (not sure about Andy and John though). I then had an offer of a place to stay that evening with Tim and Laura Moss of The Next Challenge a few miles down the road which I definitely could not turn down. Great spending the evening sharing tales of adventure. 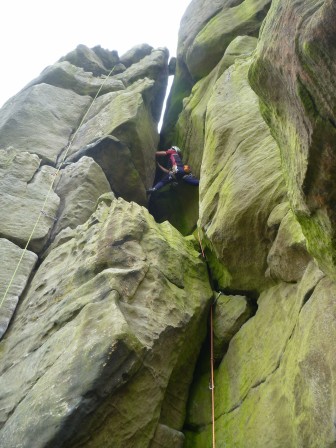 Andy T and John, happy that they don’t have to do it again

Tim Moss from the Next Challenge

Next morning I battled the headwinds heading west towards Pen Y Ghent, many cyclists doing the ‘Way of the Roses’ yelling at me I was going the wrong way rather than like them with the prevailing wind. Met up with Alasdair at Dalehead and we sped up the hill to do Red Pencil Direct before the forecast rain set in and we were rewarded with a fine, but rather blustery climb, finishing on the summit of Pen Y Ghent. I then stole a few more miles that evening, passing the 1,000 mile mark as I climbed passed Ribblehead viaduct and down into Dentdale.

Alasdair, sheltered from the wind at the base

Windy on the summit of Pen Y Ghent

The rain greeted me as I arrived in the Lakes, but I was heartened by the forecast for the coming week (which certainly came good). Jim arrived from Newcastle late in the evening and we spent the next morning waiting out the rain in a Consiton Cafe. We enthusiastically raced up to Dow Crag as soon as it stopped and once the cloud finally parted to reveal the cliff we found what appeared to be the whole crag draining onto the initial crack and slab. What followed was a rather character building assent with friction and core temperature gradually increasing with time and altitude.

There is a crag there somewhere

No suncream required with Jim 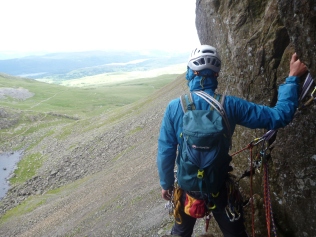 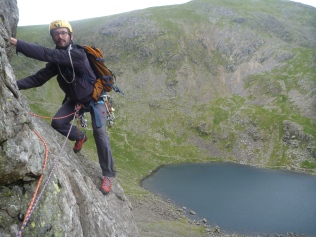 Next morning we awoke to a fine day in Great Langdale and a brisk start up to Gimmer meant we had finished off Ash Tree Slabs and C-route and were half way up Bracket and Slab before the hoards arrived. We then traversed round the head of Langdale to Bowfell, finding nobody on Bowfell buttress we scampered up for fine late afternoon views from the summit. 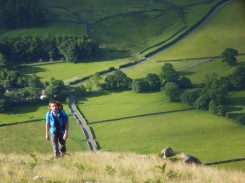 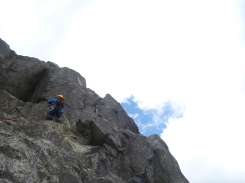 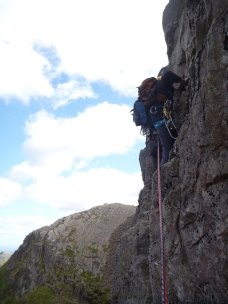 Next morning I rode round to Seathwaite where I would be based for the next four nights, meeting Jim for an afternoon climbing Gillercomb buttress. 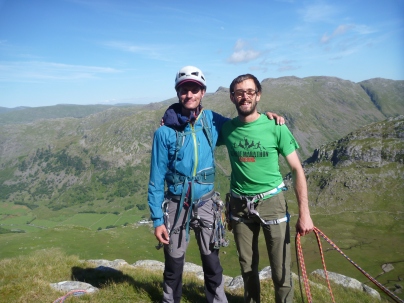 Jim finished his first stint, he will return for Arran!

That evening there was a bit of a team swap around with Jim leaving and Sam and Jamie arriving. When Jamie Fisher did this challenge back in 1997, Jamie Andrew joined him for the lake district leg and they had some great days in the fells together climbing the classics. Jamie Andrew lost both hands and feet in a climbing accident in the Alps, the same accident in which Jamie Fisher died. As I have probably mentioned in other bits of this site, Jamie Fisher had a big impact on me growing up, so for me and Jamie Andrew to do some climbs together was very special.

Next morning we set off up to the Napes where Sam and I quickly nipped up Tophet wall before the three of us made our way across to the base of Napes Needle. Any other climbers arriving (and fortunately not seen by Jamie’s prothestist) would have found the next scene rather surreal, coming round the corner to find Jamie sat sorting through his harness and climbing gear with Sam stood holding onto his carbon fibre leg socket and me using all my strength trying to waggle the foot off the end! (Jamie has special climbing feet which needed swapped over). Fortunate that everything was such a snug fit, as Jamie mentioned later that having your leg fall off on a climb is somewhat inconvenient… 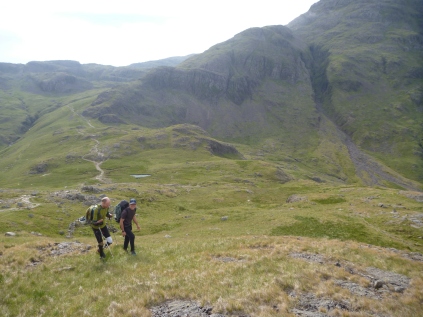 Hiking up to The Napes

What followed was one of the most amazing climbing experiences I have had, climbing both Napes Needle and Needle Ridge with Jamie and Sam. I can’t even put it into words. Really it just came down to being a great day on the fells though, climbing some great routes with great people and finishing on top of Great Gable.

Jamie on the shoulder on Napes Needle

making the final moves to the top

Jamie Andrew and me on top of Napes Needle 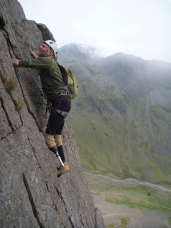 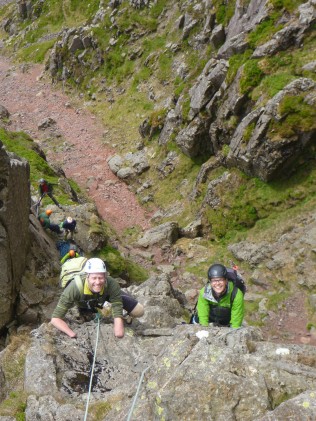 Jamie and Sam on Needle Ridge 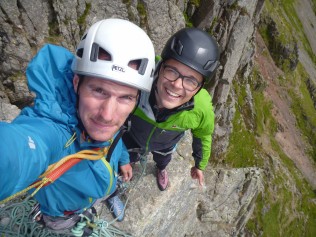 on top of Napes Needle with Sam 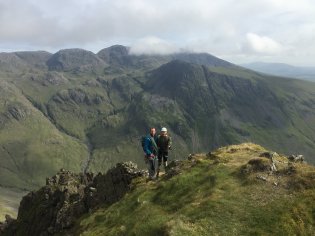 Jamie left us the following morning and Sam and I were joined by Mav for the Scafell climbs. Basing myself in Seathwaite was great for not having to cycle a long way round lakeland passes, but it did mean approaching some crags from the less than optimal starting point. It was a great walk however, up via Styhead and Corridor Route to the base of Scafell Crag. The hot weather had brought out the crowds to what is usually a rather cold and imposing place, but there was no congestion on our two routes of Jones’s Route and Moss Ghyll Grooves, and the three of us had a great day on a couple of mountain classics (even if Sam did complain about getting the chimney pitch on Jones’s). 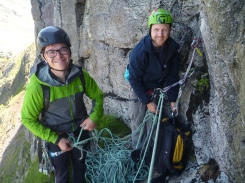 Sam just been told he has to climb a chimney 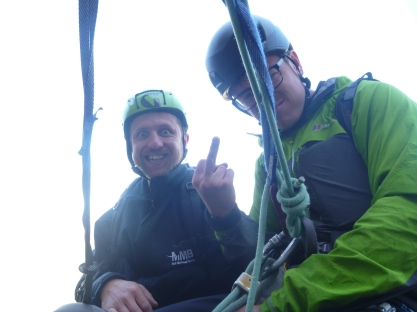 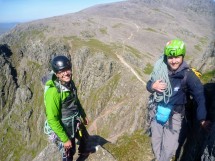 Summit of Scafell Pike with Mav and Sam

Monday morning brought another change of partner with Sam and Mav heading back to Newcastle and I was joined by Lucy. She was the perfect partner for the massive hike up Green Gable, followed by traversing Great Gable, Kirk Fell and Pillar high level route round to Pillar Rock, seeing as she is in training for the 1,000 mile silk road mountain bike race! We met up with Stephen as Robinson’s cairn who was the perfect partner for a day on Pillar as he had both written the climbing guide and is currently compiling a history of the crag. We enjoyed fine climbing and and a fine history lesson that afternoon. The long days were starting to wear on me though and I noticed it in my legs on the long hike back to camp for another 12 hour+ day. 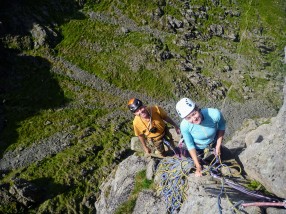 Stephen and Lucy on the blocks belay on New West Climb

nice day to be out on Pillar 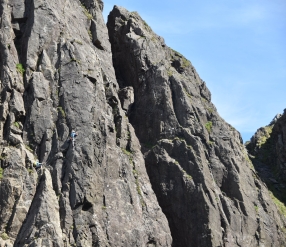 Hiking back to Seathwaite

Next morning I just had two more climbs left in England, Troutdale Pinnacle on Black Crag and Little Chamonix at Shepard’s. Both routes were thankfully in the shade as it proved to be the hottest day yet, fortunately ice cream and cold drinks were provided by the cafe at the base of Shepard’s. I waved goodbye to Lucy and then wheeled my bike practically into Derwent water before jumping in myself to cool off. 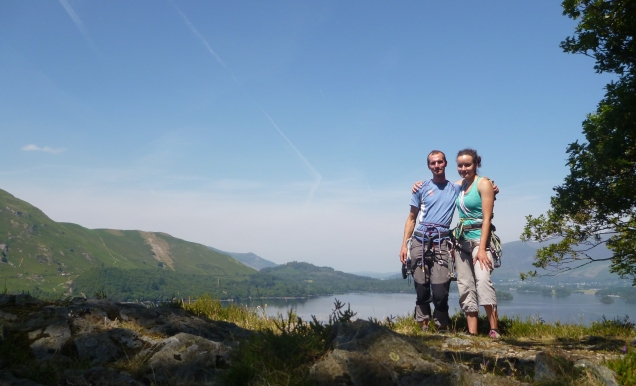 I am now on a bit of a detour, cycling to a wedding in Northumberland, and I am due to re-join my route on Arran next Wednesday.